In 1998, a senior music conservatory student walked across the Morton Myerson Symphony Center stage to receive her diploma from Booker T. Washington High School for the Performing Arts and Visual Arts (Booker T.). She was Erykah Badu, and that crescendo following four years of work changed the trajectory of the young woman’s life. Erykah is only one of the many successful career stories that were launched from the stages at Booker T.

Years later, Vonda Klimaszewski (Booker T. ’83) was photographing the high school’s current seniors. Some of them brought props to their sittings with them and danced and performed for her. She wondered what happened with them as their careers progressed. Susan K. Elliott Hamm, an accomplished writer who became acquainted with Vonda, said: “She had the idea to track down graduates and see where they had gone in their careers.”

The two women galloped like Pegasus, the school’s mascot, to get started. It would take four years to develop the plan for a coffee table book marking the school’s 40th anniversary, and it would feature a number of those interesting stories of Booker T. alumni.

The book “Fulfilling the Vision” hit stores in April 2017 to an enthusiastic reception. “We created a 501(c)3 organization with a mission to enhance the arts community with publications and materials that explore artistic careers and support creative potential,” Hamm added. “Current and past faculty of the school have received copies of the book as a thank you for their contributions to the thousands of students who have benefited from their teaching and mentorship. We think people don’t always recognize the depth of the faculty’s contributions to their students. Sales of the book also benefit the school’s PTSA [Parent Teacher Student Association] program.”

It explores the history of the school’s evolution from Booker T. Washington High School, the neighborhood school, to an Arts Magnet school, up to its prestigious place in the downtown Dallas Arts District. Readers learn about invaluable contributions from visionaries and dreamers like the Dallas Theater Center’s Paul Baker and Dallas ISD Superintendent Nolan Estes. It tours the school’s history of leadership, gives respect to deceased faculty members, and has editorial content from current school faculty.

The author commented about an alumna who is one of the highest profile Booker T. achievers. “Trying to keep up with multi-Grammy, Soul-Train and American Music Award winner Erykah Badu is a bit like trying to lasso a whirlwind,” Hamm said.

Singer/composer/playwright/artist Edie Brickell (Booker T. ’84) lives in Connecticut and works in the visual arts. Susan writes, “Perhaps no Arts Magnet graduate illustrates the power of a dream as much as Edie Brickell.” She and her fellow Arts Magnet alumni band Edie Brickell &  New Bohemians have just released their newest album called, “Rocket,” which comes out on Oct. 12.

Klimaszewski graduated in 1983 from the Booker T. Theatre department and she has three children who attended the school. Hamm’s daughter graduated from the theatre program in 2015. Hamm also served as president of the Theatre Guild for two years, supporting the faculty and students.

About writing the book Hamm said: “It was a wonderful adventure to meet so many talented people and see how their careers have evolved. We met with subjects everywhere from a spectacular high-rise apartment in New York City to a street corner in Deep Ellum and beside the Pacific Ocean in Los Angeles, tracing Broadway dancers, musicians, fine artists and theatre producers around the world. It was an inspiring journey to see how creatives find their way in building and maintaining careers.”

Klimaszewski agreed. “I could not have asked for a better result,” she said. “It was an adventure to meet so many kindred spirits. It was often hard for me to contain my enthusiasm that the grand experiment for this art school that Paul Baker envisioned for us 40 plus years ago actually did what he wanted it to do. And more. Much more. When we meet fellow alums we just ‘get’ each other. We have a similar work ethic and respect for the work we will create together. It is intoxicating to work with others who fundamentally understand one another.”

“When we met Arlo Eisenberg (Booker T. ’91), a great graphic designer, he offered to design the book, and I am thrilled with his design,” Klimaszewski said. 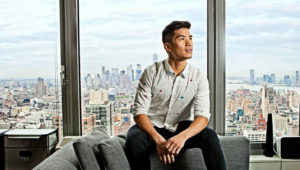 “He added the perfect design and structure to make the photos and words come together in a form that is both easy to look at and to read. There are three ways to experience this book (i.e., the pull quotes, photos and the stories themselves). And his design facilitates that experience.” Eisenberg is also an ad executive and aggressive inline skater in Dallas. For five years, he offered color commentary for action sports for ESPN.

Hamm is a writer and editor, and she her husband, Jerry, have a daughter, Lauren, who is a senior studying film at the Savannah College of Art & Design. The writer studied journalism at the University of Houston before becoming editor of three national publications at age 20.

Klimaszewski has two daughters, Julia, 25, and Kat, 22 (Booker T. ’14). With her husband David Klimaszewski she also has three stepdaughters: Phoebe, 22, Violet, 20 and Riley, 18 (Booker T. ’18). Klimaszewski attended Southern Methodist University before graduating from Rochester Institute of Technology with a BFA in photographic illustration in 1991. She has worked in the photographic industry since 1991 and solely as a portrait photographer by trade since 2007.

In addition to the accomplished artists featured here, the book visits dozens of other successful alumni in the theater, on Broadway, on television, in education, in music and other unexpected fields in complement within the arts.

Norah Jones (Booker T. ’97) is another of the highest profile alumna as a popular musician, singer, songwriter and actress. Jones is now based in New York.

Klimaszewski and Hamm both agree — the impact Booker T. had on students who attended the school has shaped their lives in a positive way forever. With their new book, they hope the stories and photographs will illuminate the abundance of talent hidden behind the walls of the historic Dallas high school.

“Fulfilling the Vision” is available online at fulfilling-the-vision.org and at special events connected with Booker T., such as class reunions, registration and performances. It is also available around town at locations like the Crow Museum of Asian Art, the Nasher Sculpture Center, the Morton H. Meyerson Symphony Center and at Deep Vellum bookstore.