According to the Center for Disease Control, “On any given day, about one in 31 hospital patients has at least one healthcare-associated infection.”

Richard Harris was a three-time cancer survivor when, during one of his many hospital stays, he was presented with the same problem as always, which he knew wasn’t unique to him. He wondered, “How can I lift a toilet seat without actually touching it?” Since 1985, Harris has been a resident of Lakewood, Casa Linda, and now Casa View.

Just a few of the hazardous germs you might touch when raising the toilet lid are antibiotic-resistant staphylococcus, which is one of several “flesh-eating bacteria,” Norovirus, also known as the “cruise ship bug,” E. coli, Shigella and streptococcus.

Surely someone had addressed the need to avoid those nasty germs by the 21st century, but Harris was focused on surviving cancer, dealing with its treatment and adjusting to his new normal. He was reminded every trip to the bathroom how much he wanted to avoid touching the toilet seat in the hospital and at home.

The survivor began researching the internet tirelessly for a solution he could use at home. He said, “Being a former private investigator and researcher, I looked until I found exactly what I had in mind.”

Now that he had found the ideal solution for himself, he knew how much institutions, businesses and the public would benefit, too. He purchased exclusive worldwide marketing and distribution rights from the inventor and founded Flushed with Pride.

Harris spent weeks flooded with ideas and questions, like how to market it, where, and how to sell it. What markets would benefit the most? “The list grew longer and longer until I discovered there are approximately 350M toilets in the U.S.” He set out to have the Sani-Hani Antimicrobial Toilet Seat Lifter/Handle installed on every one of them. “My mission is to save the world one toilet at a time,” Harris said.

Harris’ wife, Gretchen Boettcher, is a University of Texas alum with a degree in geography. She is 51 percent owner of the corporation. The entrepreneur taught social studies at Booker T for 15 years and was the head of the department on retirement.

Sani-Hani is a certified, woman-owned business. “One of the main reasons we established the company that way is because there is no certainty of my health or longevity, and if we can successfully build it up, then she will have something of value,” Harris said.

Between 2007 and 2015, Harris had three bouts of Non-Hodgkin Lymphoma and Gray-Zone Lymphoma, a very rare strain. He had a stem-cell transplant, and on his 10-year anniversary trip with Gretchen to Hawaii, he ended up in an ER in Kauai before flying home to check in to Medical City. 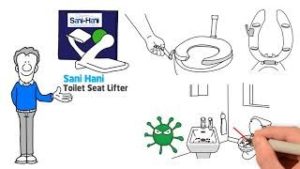 A few Sani-Hani installations in the White Rock area are at River Rock Chiropractic, White Rock Dermatology and Muffler King, all on Garland Road.

Sani-Hani can be purchased in the area at Stone’s Ace Hardware in Casa View and Lakewood Ace Hardware among other retail locations.

When the couple learned that “Shark Tank” would be auditioning at a Small Business Expo in the Kay Bailey Hutchison Convention Center, the couple packed up a display and said, “Get out of my way.”

No one can say Harris has let much grass grow under his feet, despite his health. His career has included a variety of entrepreneurial ventures into yoga, oil, pianos, jewelry, legal document delivery and a decade as a private investigator. He was a consultant to companies including entertainment, oil technology and warehouse technology. “My main job for the past four years was staying alive,” he shared. In June, 2019 he started Flushed with Pride.

Harris said that he’s here today thanks to love and support of his wife, family and friends. “If not for them, I would not be here. I am very blessed. It’s going to take the rest of my life to pay it forward,” he added. “I love life and each day is a gift to me.”

“My doctor will not take credit because frankly, he can’t explain how I survived 105 straight hours of very toxic chemo at every treatment for months. He calls me his ‘miracle man.’”

Boettcher said, “We have combined practicality and humor to get Sani-Hani into household bathrooms and restrooms at medical clinics, restaurants, banks, schools, theaters, libraries and other public places.”

She continued to explain Sani-Hani: “It is a three-inch, lightweight handle that you attach to a thin platform that adheres to the underside of most flat-bottomed or slightly curved toilet seats.”

“Once it’s attached, you never have to touch the toilet seat but can safely grab Sani-Hani’s antimicrobial handle to raise or lower it. The ergonomic design makes it easy for adults and children to use, and the handle extends downward, so it doesn’t get in the way when someone sits on the seat,” she added.

Sani-Hani is priced at under $10 and many families purchase two or three depending on the number of bathrooms in their home. According to Boettcher, Sani-Hani also works well for parents in the process of potty-training their toddlers.

“We’re number one for number one because everybody needs a lift now and then” and he even adds, “and we’ve got a handle on it.”

Harris’ mantra is another quip: “I am a cancer warrior. Don’t mess with me,” and it’s a candid expression of how lucky he feels.