By whiterocklakeweeklyadmin on September 23, 2021Comments Off on Dallas ISD Board of Trustees Dan Micciche, District 3

On a recent Saturday morning, Bryan Adams High School men’s basketball team took to the shores of White Rock Lake to participate in a community service event, the goal of which was to put a smile on the faces of all the runners, riders and everyone there.

For five years (with last year off due to the pandemic), the team has been holding this ritual,  greeting everyone at the lake with smiles, signs and the words: “Morning, Morning. Have a Great Day. Don’t Let it Get Away!”

Coach Juan Rivas says the yearly events are the idea of Joe Chatham, a retired Dallas police officer whose nonprofit group, Empower Your Future, works with young people on “Refresh” projects to spread good cheer. For Chatham, the idea started years ago when someone who was attempting suicide on San Francisco’s Golden Gate Bridge said he wouldn’t have tried it if someone had just said a kind word. With that in mind, the project aims to put smiles on everyone’s faces. The Refresh project operates on the premise that “he who refreshes others shall himself be refreshed.” 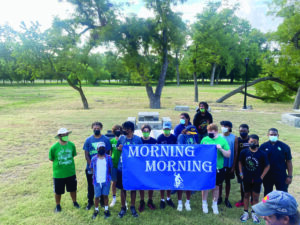 Coach Rivas says the response at White Rock was “overwhelming, with people stopping and talking to the kids, offering to come to the games and wanting to learn more about what we’re doing.”

The coach says they’ll be out there again next year, and quoting another axiom, he says, “Education + Perseverance = No Limitations.”

Bryan Adams Cougars to Kick off the Season

The Cougar Kickoff Pep Rally was Wednesday, September 15, from 7 to 8 p.m., on the new Bryan Adams Football Practice Field on campus. The outdoor activity followed all district COVID Guidelines, such as mandated masking, 3-foot social distancing, and any other protocols that were in effect. The rally began with a ceremonial ribbon cutting for the new turf practice field, featuring some of the Bryan Adams Football, Band, Belles, Cheer and JROTC Alumni along with other special guests. Several of the athletic programs and organizations spoke or performed during the pep rally. Go, Cougars!