By whiterocklakeweeklyadmin on February 18, 20182 Comments 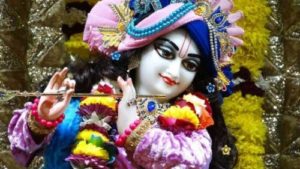 The Hare Krishnas Celebrate Gaura Purnima — The Golden Moon Festival. Kalachandji’s Hare Krishna Temple will be celebrating this festival on Thursday, March 1. This year marks the 532st anniversary of the birth of Sri Chaitanya, the mystic saint who pioneered devotional yoga (Bhakti) in 16th century India and began the practice of congregational chanting (kirtan) that has now spread around the world.

Gaura Purnima signifies that the Lord illuminates the world from the darkness of ignorance with the moonlike rays of His sublime teachings.

The purpose of His birth was to teach by example how to gain full enlightenment simply by chanting the Holy Names of the Lord. He taught that anyone — regardless of background or spiritual qualification — could develop their innate love of God and experience great spiritual pleasure by chanting the Hare Krishna mantra, thus starting the kirtan movement.

His birth festival is celebrated annually by Krishna devotees all over the world — especially in the area of Mayapur, India, the place where Sri Chaitanya was born.

The celebration starts at 6 p.m. in the temple room, and will conclude around 9 p.m. The evening will start with kirtan, (singing of the Lord’s names to music). There will also be a kind of ablution ceremony called abhisheka, in which forms of Caitanya and Nityananda are bathed with a variety of liquids. Afterwards, there will be a class about Sri Chaitanya, followed by a play. Following the class, a parade is scheduled to go around the neighborhood with more kirtan accompanied by devotees singing devotional songs, dancing and playing musical instruments. The festival concludes with a multi-course free vegetarian feast. Kalachandji’s Hare Krishna Temple is located at 5430 Gurley Ave. in Dallas. For more information, call 214-827-6333.