By whiterocklakeweeklyadmin on June 16, 2022Comments Off on George Trotter Swanson

According to the journal Scientific American, nearly 13,000 years ago, a fragmentary comet collided with North America, creating a massive impact and leaving in its wake large deposits of nanodiamonds. On September 15, 1955, the Earth was again rattled with the arrival of George Trotter Swanson, born on that date to Ann and George W. Swanson in Corpus Christi, Texas. George was the fourth of the Swanson’s six children; their only son and a proud, 6th-generation Texan. His unique position as the only he in a sea of shes, established George from the outset as an iconoclast, a maverick and a renegade — reputations he would continue to burnish throughout his lifetime. 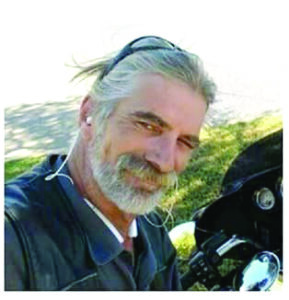 George’s formative years were spent wreaking havoc with his sisters in a large farmhouse just north of Dallas. In an attempt to salvage their own sanity, his parents moved their spirited brood to North Dallas where George graduated from St. Rita Catholic School before attending both Jesuit College Preparatory School and W.T. White High School. It was during these years that George developed his love for fast bikes, beautiful women and risky living.

After high school, he resided for a while in a teepee outside Flourissant, Colo. and twice moved to Honolulu, Hawaii. At other points, he lived in Arizona and Las Vegas, Nev. His only son, James, was born in Dallas during his marriage to his first wife, Jan.

After working for several years as a photographer at a studio on Lovers Lane, George went on to become a successful entrepreneur, operating his own independent automobile repossession business. Ever the thrill seeker, he referred to his profession as “finding a way to steal cars legally.” He often advocated for the people whose vehicles he was contracted to reclaim; helping them find alternate sources of financing or potential employment opportunities. He became known to friends and clients alike as “Repo George.”

After 33 years, he retired on January 4, 2020 without ever engaging in an altercation or facing a firearm, and he would frequently assert, “I don’t need firepower, I have a Higher Power!” His leisure years consisted of traveling to motorcycle rallies and attending the concerts of local blues musicians, many of whom became his close friends.

While George never quit loving bikes (he owned more than 40 motorcycles over the years) or admiring women, he did give up chasing his demons. Earlier this year, on January 4th, he celebrated 35 years of sobriety, quite an accomplishment for a guy who embraced living on the edge. He traded the wild life for a purpose-driven life. He was a double-addiction survivor, overcoming both drugs and alcohol, and was a frequent speaker at AA meetings, where he regaled his audiences with his sharp wit and wicked sense of humor. He sponsored many of its members in their quest for sobriety and spent the balance of his years helping others to and through recovery.

In lieu of flowers, memorial donations may be sent to 24 Hour Club, a facility for men and women in recovery, at 4636 Ross Avenue, Dallas, Texas 75204. Or, online at Dallas24HourClub.org.

When a comet collides with Earth, the sheer heat and intensity of its impact transforms common coal into diamonds. George’s arrival packed a similar wallop — on our lives. He was a rare and special friend, a force of nature. And friendships like his leave in their wake memories more precious than diamonds.