By WRLWAdmin on May 28, 2020Comments Off on Green Awards honor journalists

The Headliners Foundation has announced winners of its statewide Charles E. Green Award contest, recognizing the best of the best in Texas journalism from calendar year 2019. 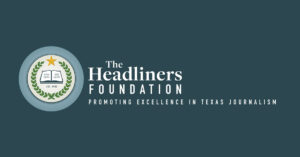 Winners were chosen in 11 categories from print, broadcast, and online formats, and each will receive a $1,000 cash prize, in addition to recognition by the Foundation at its annual Mike Quinn Awards luncheon on September 26, 2020 at the Headliners Club in Austin.The Green Awards contest places the division-level winners of statewide awards from both the Texas Associated Press Managing Editors and Texas Associated Press Broadcasters organizations in a head-to-head competition. Small, medium and large markets compete, with one winner in each of the 11 categories selected by judges from across the nation who are recognized experts in news media or academia. In addition to the Green Award winners, division-level winners in each category receive a $500 cash prize, bringing the total awards to more than $30,000.

“The Headliners Foundation is proud to once again bring much-deserved recognition to an astonishing body of work produced by Texas journalists,” said John Lumpkin, chair of the Foundation’s Professional Excellence Committee, which oversees the awards process. “As a result of our longstanding partnership with these well-respected AP organizations, the Charles E. Green Awards are among the most prestigious awards in Texas journalism today.”

Patti Ohlendorf, Chair of the Foundation’s Board of Governors agrees. “The Charles E. Green Awards are an important part of our mission, and we congratulate this year’s winners on their outstanding achievement,” Ohlendorf said.

Information on each of these award winners, along with judges’ comments and links to the award-winning stories is published in the Journalism Awards section of the Foundation website at https://www.headlinersfoundation.org/green-awards-2019.