By whiterocklakeweeklyadmin on March 4, 2021Comments Off on Learning comes from improbable source

When one thinks of the College Football Playoff (CFP), an elaborate playoff system incorporating fabled bowl games into the eventual crowning of a National College Football Champion, million-dollar sponsorships, big TV ratings and revenues and thoughts of another title for the Alabama Crimson Tide or the Clemson Tigers comes to mind. 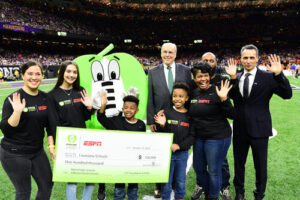 Associating the CFP with education might feel as unlikely as a fourth stringer from a power conference team ever getting in a game. Yet the CFP has set a goal to go the “extra yard,” and that ball is in the hands of Britton Banowsky.

“We were in Malibu because of my dad, not because were movie stars or anything,” Banowsky said. “My dad moved to the University of Oklahoma, so that’s what took me to Oklahoma.” Banowsky earned an undergraduate and a law degree from OU and moved to Dallas with his wife Cindy after law school.

“I started practicing law here in Dallas,” Banowsky said. “I was a lawyer in a downtown office. And about three years into my practice, I got an opportunity to start over in college sports at about 28 or 29. One thing led to another and I ended up with the Southwest Conference, and then the Big 12 Conference and then Conference USA for 13 years. The vast majority of my professional career has been in college sports.”

Banowsky was commissioner of Conference USA until 2015, when he resigned to become executive director of the CFP Foundation. He said then that the move was to “further his work with other non-profit organizations.” Despite the recent challenges of COVID-19 and school uncertainty, his work is paying off.

The CFP Foundation is the largest sports entity in the country to support teachers and invests approximately $38 million in support of education, supporting 311,000 teachers nationwide and more than seven million students.

The CFP Foundation, a nonprofit organization based in Irving and the community investment arm of the CFP, works in partnership with institutions of higher education, sports organizations, corporations and other nonprofits. The CFP Foundation’s primary platform, Extra Yard for Teachers, is dedicated to elevating the teaching profession.

“There are biases baked in and opinions about bowl coalitions or the BCS [the previous college football playoff] or whatnot held for a long time,” Banowsky said. “But that is totally outside the scope of our work. There is a little bit of a firewall between our work and the event side of the deal. We are tethered to the College Football Playoff. We focus on K-12 education, but primarily on teachers across America and we scale our work to a lot of partnerships with bowls and conferences and ESPN and host cities. And it is through all of those partnerships that we drive impact.”

Banowsky was in the room when “they were going from BCS to CFP.” Banowsky recalled, “There was all of this money being pumped into the new system. The commissioners that were with me had a very focused conversation on whether this is going to be about the game or games or whether we were going to give back to our communities in a really tangible way. It was that conversation that led to an exploration that led to a decision to not only create a foundation, but create a sustainable revenue stream.”

It was determined the foundation would be funded by merchandising royalties from the event side, grants, donations and other resources. But the focus of the foundation needed to be established.

We are extremely targeted in our focus,” Banowsky said. “We are not trying to be a mile wide and a foot deep. We are only about teachers. It is about helping K-12 education, but it is also about supporting teachers. We believe teachers are the key. Without a good teacher, you are not going to have a good educational outcome. And without that, you won’t have a really good society, you won’t have a good community and your workforce won’t be prepared.”

The foundation supports all K-12 teachers and all schools, public or private. “We have four pillars,” Banowsky said. “One is supporting resources in the classroom for teachers, knowing that they don’t sometimes have the resources to be successful and often have to spend out of their own pocket.

“Number two is we use the platform of recognition for teachers.

“And the fourth thing is that we are really into recruitment and retention and strategies for communities. In that world, we do deal with university students as they try to decide what they want to do with their lives and we try to encourage them to be teachers.”

The pillars are incorporated into the CFP Foundation’s primary platform, Extra Yard for Teachers, dedicated to elevating the teaching profession by inspiring and empowering. Their mission is to envision a country in which our greatest assets, teachers, are given the resources, recognition and professional development they require in order to prepare our nation’s students for success. More information can be found at cfp-foundation.org.

Determination of what can benefit a school or an educator is often tailored to specific needs. “We work with our partners and give them the boundaries,” Banowsky said.

“For example, we worked with the people at the San Francisco 49ers EDU and they were focused on STEM learning. We play in that space. But then they wanted to help teachers in the area with housing. So, we partnered with an organization to identify individual teachers in need of a down payment for a home and were able to raise the funds for that.”

Beyond the glamor and glitz associated with major bowl games and the college playoff system, the CFP Foundation is making a difference in education. “We are all in for teachers,” Banowsky said.