By whiterocklakeweeklyadmin on September 9, 2021Comments Off on Past challenges create lighter future for artist

Visual artist Nancy Cole has participated in the White Rock Lake Artists Studio Tour since 2003. She has been a popular stop on the tour with her ceramic sculptures and garden art. Many people do not know that Cole is also an accomplished painter, and she was a professor of art at Dallas Baptist University until she had a serious accident in 2016 and developed a rare neurological condition, which partially paralyzed her. She had been a marathon runner for years and, just a week before her accident, participated in a half marathon. After a long year in a wheelchair and intensive physical therapy, Cole fought hard to regain strength and functionality in her hands and limbs.

From the moment anyone drives up to Nancy Cole’s house, it is apparent that an artist resides there. Lush plantings and natural landscaping are interspersed with a rainbow of ceramics works. Follow the pathway to the back yard, and it opens into an oasis of dappled sunlight where squirrels scramble in the canopy of a huge oak tree, making their presence known by the explosions of acorns on the tin roof of the ceramics studio. Reflections off the tiers of brass chandeliers suspended from branches create a palpable sense of magic in the setting where whimsy and creativity meets.

When Cole was asked to remember the spark that ignited her passion for art, her story is about an inspiring teacher. “My family moved to Fort Worth when I was a child, and I had this amazing art teacher for several years named Mrs. Griffin. She was so inspiring, encouraging and kind that I decided that I wanted to teach art one day.”

Although her parents wanted her to be an English teacher, when she went to register for college, she gravitated to art classes leading to a double major in English and art. Cole reminisces: “Years later, I attended an art educators conference where Mrs. Griffin spoke and presented a slide show. One of the slides was a photo of me holding up a painting that I painted in her class.”

Cole went on to fulfill her dream of teaching art in Dallas public schools. After achieving a master in fine arts degree, she became an adjunct professor of art at Dallas Baptist University and taught there for 15 years. Cole takes great pride in the success of so many of her high school and university students. “They were as much an inspiration to me as I hope I was to them.” 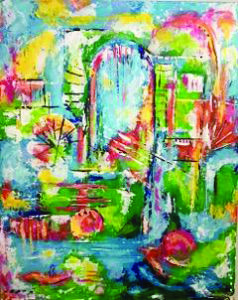 For a year after her accident, Cole was confined to a wheelchair and unable to do practically anything for herself. When she returned home from rehab, friends and family rallied to her support. “Women from my church, the White Rock United Methodist Church, would come by for ‘Nancy duty’ bringing food, staying with me, playing music and singing together.” Little by little, Cole began to get some strength back and went back into the studio to make ceramics. “Although the pieces I made were sometimes a little lopsided, because my left hand still isn’t functioning very well, I’m beginning to enjoy the crookedness.”

In preparing for the upcoming White Rock Lake Artists Studio Tour on Oct. 9-10, Cole has created a number of vibrant, joyous paintings for the tour. Cole had no explanation for the transition from the dark colors of earlier paintings to her lighter, brighter ones. She said, “Perhaps it has to do with where I’ve been and where I’m going.”