By WRLWAdmin on May 29, 2020Comments Off on Philadelphia writer takes next adventure to Dallas

Marnie Schneider grew up in a football family.

From 1969 to 1985, her grandfather, Leonard Tose, was owner of the Philadelphia Eagles and instrumental in bringing to prominence the lauded NFL Films based in Mount Laurel, N.J. What started as an extension of the NFL public relations department, under the late NFL Hall of Famer and visionary Ed Sabol, grew into the preeminent chronicler of NFL history.

During his tenure as Eagles owner, Tose established the first Ronald McDonald House. Together with general manager Jim Murray, Eagles player Fred Hill (whose daughter had leukemia), Dr. Audrey Evans and McDonald’s regional manager Ed Rensi, a house was established for families to stay when their children received treatment for pediatric cancers. It was financed by proceeds from sales of the McDonald’s Shamrock Shakes throughout the Philadelphia area

An only child, Schneider saw her mother Susan Fletcher break into the notorious “NFL Boys Club,” when she became the Eagles’ vice president and legal counsel.

And now Schneider is about to release her seventh book, geared toward children but enjoyed by adults. It is a colorful travelogue featuring unique characters that ultimately lead to the city’s NFL stadium for a football game. Her latest book is about Dallas. Specifically, the Dallas Cowboys.

Isn’t that tantamount to Charlotte Jones (daughter of Cowboys owner Jerry) writing a book debating whether Pat’s or Geno’s has the better cheesesteak in the “City of Brotherly Love?” 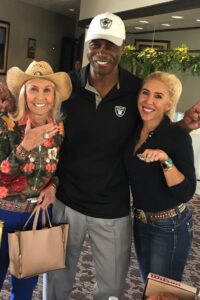 Currently living on Lake Norman near Charlotte, N.C., Schneider has just released her seventh book in the Gameday series, “Football Freddie & Fumble the Dog: Gameday in Dallas.” In the written tour of the metroplex, Football Freddie (the book’s heroine and short for Fredericka) and her dog Fumble (patterned after Schneider’s real life rescue dog Irving) are joined by fictional friend and Dallas-native J.R. as they visit places like the Dallas Museum of Art, the Perot Museum, Fair Park, the John F. Kennedy Memorial, the Katy Trail, White Rock Lake, Deep Ellum’s Pecan Lodge and end up in Arlington for a Cowboys game at AT&T Stadium.

Growing up in Philadelphia and like so many Pennsylvanians, Schneider graduated from Penn State (in broadcast journalism) and loved college football games while embracing the college life. “I am a football fan,” Schneider said. “Of course, I am an Eagles fan because my grandfather owned the Philadelphia Eagles and I grew up in Philadelphia.”

The focus of her books is easy to find based on her upbringing. “I had this amazing opportunity to travel around with my mom — a wonderful lady — smart, beautiful and talented,” Schneider said. “She was a single mom. I am single mom [raising three teenagers]. What are you going to do? She took her kids places and I take my kids places. I bring my kids on business trips or work and that is a great luxury. Certainly, my mom took me to a bunch of great places, but the backdrop was always football.”

After college, Schneider went to work at NFL Films. “I had this incredible opportunity to work with [NFL Hall of Famer and son of Ed] Steve Sabol and learned the business and travel around. I tried to be neutral. I saw football games from a different level, not just from the Eagles and because my grandfather owned them.”

It helped that Tose was great friends with Ed Sabol and aided in launching the company. “I joke that I could have done whatever and they were going to have to hire me,” Schneider said. “But again, getting in the door is everything. I was fortunate that I was able to get into the door and I love football and love learning and was able to embrace it. I was around NFL Films, like a lot of places, that was a male- dominated environment. But because I had some knowledge, I could speak a little bit of sports. I can speak French and a little bit of Spanish, but speaking sports is the universal language and allowed me to legitimize myself.”

She moved to Los Angeles to become an actress. Her most visible role was as Joyce, a flight attendant in the 1998 film “The Wedding Singer” staring Adam Sandler and Drew Barrymore, which had a box office gross of more than $123 million worldwide. “It’s always on TV and people love it,” Schneider said.

After losing her desire in Hollywood, Schneider reached back to her past. “I thought, you know, football is really my thing. We started working on Football Freddie three years ago and the first book came out in 2017.” 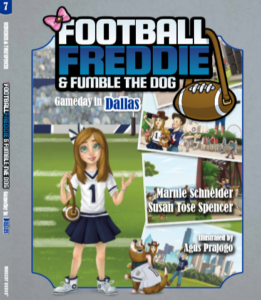 In the opening pages, Freddie explained that, with trusted companion Fumble, “We love everything about football: watching, playing, and most of all, traveling to different places where teams play their games.” Sounds like it came directly from the mouth of the author.

Freddie goes on to explain that “I started playing flag football in gym class, and soon I was throwing footballs for Fumble in my backyard. He’s a great receiver!” The 20-page book is big on colorful pictures and graphics. A portion of the book sales will benefit various chapters of Ronald McDonald House and ACEing Autism, a group whose mission is to connect children with autism through tennis.

Book printers are currently closed because of the coronavirus, so final print publication has been delayed. But an online version of the book can be viewed at footballfreddie.com.

On January 25, 1981, the Eagles appeared in their first Super Bowl in franchise history. They faced the Oakland Raiders in Super Bowl XV in New Orleans, and lost 27-10 in part because of the unlikely play of linebacker Rod Martin, who had a Super Bowl record three interceptions.

“For many, many years from 1981 [as a 17-year old] to 2017, I held a grudge,” Schneider said. “That is a long time to hold a grudge. Rob Martin was my personal boogieman. I would say ‘If I ever meet that Rob Martin … you know.’” A chance meeting around a Super Bowl LI event changed everything.

“I had my teenagers with me and was carrying plates of food when, out of the corner of my eye, I saw this gentleman at a table with Oakland Raiders gear on wearing sunglasses,” Schneider recalled. “I was not really paying attention because I was more interested in eating my macaroni and cheese. Then, the gentleman stood up and offered me his seat. I quickly realized that it was my personal boogieman Rod Martin. I put my stuff down and said ‘I know who you are.’ I saw him get a little nervous because how many blonds walk up to him and tell him ‘I know who you are. You’re Rod Martin.’ We became fast friends and are still very good friends. Now I root for him every year that his record won’t be broken.”

Freddie and Fumble are on a mission to see every football team in the country on their home turf, while taking in the area’s many notable sites. Schneider channels her love of football and travel through Freddie, and vividly highlights her passions in the Football Freddie series. Even if, as Schneider might say and W.C. Fields famously said he would like his epitaph to read, “I would rather be living in Philadelphia.”

Philadelphia writer takes next adventure to Dallas added by WRLWAdmin on May 29, 2020
View all posts by WRLWAdmin →