Verena Mahlow perches behind her desk, jotting notes on index cards and then arranging the cards as she prepares to research for her next novel, a sequel to her recently published “Island of Dead Gods.”

Her office surrounds her with what she has identified as her muse — bookcases full of literature. A golden yellow couch backs up to a soft green wall, adding color and relief from the black and white gleam of her personal computer. She loves color, which adds whimsy to her office. It also mimics the colorful visuals in her writing.

She’s not new to writing. She’s been a journalist and a screen writer as well as a translator and interpreter. She’s written short stories and scripts. When she first came to the states, she was writing scripts for German television. She found the long-distance collaboration difficult, so she decided to work on her book.

Mahlow was born in a small town in Germany and shares time between her home in Little Forest Hills in East Dallas with her husband Alan and her home in Mainz, Germany. No matter where she is, her imagination and creative juices are engaged.

“I really love living on two continents,” she said. Her now-grown son, Konstantin, lives in Germany. The more difficult thing is figuring when to go to Germany. “I used to go in summers but now it gets too hot.”

Mahlow is in perpetual motion, always doing something. “If you are bored, you are not using your imagination,” she often told Konstantin when he was a child and complained about having nothing to do.

Mahlow herself is never bored — unless she forgets a book and she’s stuck in a waiting room. Even boredom there is doubtful because she’s probably thinking about her book.

Just listening to her talk about her life leaves the listener agog. She speaks five languages — German, English, French, Italian and Finnish.

For her, life is an adventure that began when she was a child. Her family took extensive car trips during summers, and she learned early to save her money for Eurail passes and plane tickets. She’s been from Greece to Gibraltar as well as coast to coast in the United States.

Education is another of her passions and one that didn’t limit her to Germany.

She went to summer schools in France, had scholarships to Italy, was a Fulbright scholar in Middlebury, Vt. She graduated with a masters in German, American and Italian Studies from the Johannes-Gutenberg University of Mainz.

She also has a doctorate and pushed her adviser’s comfort zone when she decided to do her dissertation on Jewish writer Claire Goll and the female identity in the arts. He wanted her to write about Goll’s husband, who was a better-known writer. She pressed on, insisting on researching and writing about Claire. Now readers can see Goll’s influence as women are the movers and shakers in Mahlow’s works. 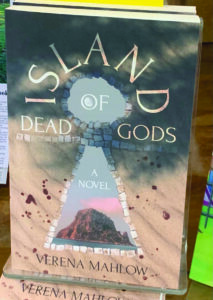 “Island of Dead Gods” was first written in German and sat unfinished for a time. She was inspired to complete it and in English because of political situations.

“Suddenly it’s the 21st Century and misogynism is coming out and from every corner it seems,” Mahlow said. “So, then I decided to pick it up again.”

Her first novel was in German. Loosely translated the title means “The Man for the Thirteen.” That novel won first place in a female literature competition hosted by the German publishing house Lübbe. She plans to translate it into English.

Deciding to write a novel in English gave Mahlow a little pause. She worried about her vocabulary and her topic. She had the draft in German. And had her agent in Frankfurt been more supportive, the book might have first been in German. But she fired her agent when he told her it was great and then said it needed male characters and the story to be more mainstream. She chose to soldier on rather than change.

Mahlow knew she couldn’t write the book on her own. She looked to find people who had like goals and who would both comfort her and provide her with honest critiques and suggestions. She chose to join Writing Workshops Dallas under instructor Blake Kimsey. She carried in the first 100 pages of the book, seeking to get honest feedback. Each member of the group was tasked with sharing the first 50 pages of their books. The group members then read each other’s submissions with a critical eye. Mahlow worked as hard on their books as she did on her own. Each gave suggestions. All cheered her on to finish it. So, 50 pages at a time, she progressed through the book until she and her writers’ group were all pleased with the book.

One thing Mahlow shared was how time-consuming writing a book is. Most people don’t realize how much work has to be done before the actual writing and rewriting process.

“Island of Dead Gods” takes place on Ibiza, an island in the Mediterranean off of the coast of Spain. Mahlow had lived there off and on many times. While on Ibiza, she translated a book on Ibizan ethnology and wrote her doctoral thesis. She also absorbed what life was like there. It shows in her book published by Atmosphere Press.

The book is available at Amazon.com as well as other vendors.