By WRLWAdmin on June 23, 2020Comments Off on Deep Vellum to award 43 grants

In response to the economic crisis spurred by the COVID-19 pandemic, Dallas-based nonprofit publisher Deep Vellum launched an emergency fund for Texas writers last month. Today, Deep Vellum announced that it plans to award 43 small grants to writers from around the state in order to help mitigate the devastating effects of the crisis on the literary community in Texas. 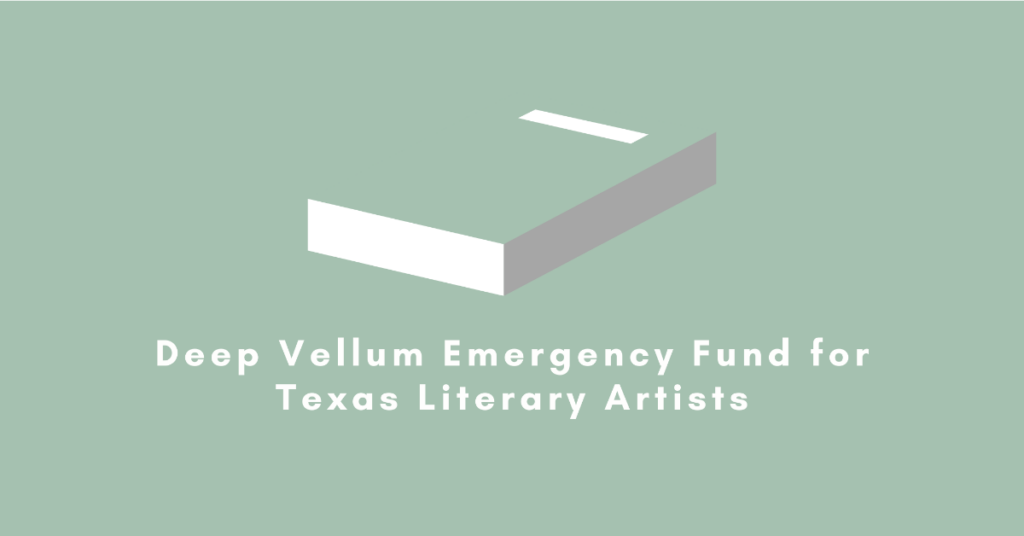 Awardees come from across the state and include recipients from rural areas in Central and West Texas and the southern border, as well as from all of Texas’s major metropolitan areas. Awardees include poets, essayists, novelists, playwrights, screenwriters, and children’s book writers, and they publish original work in English and Spanish.

The grants are intended to assist Texas writers with short-term financial needs, and Deep Vellum already has plans to begin fundraising for a second round of the Emergency Fund grant since the economic fallout will continue to negatively impact writers through the rest of 2020 and beyond.

“The data we collected through the online applications,” explained Deep Vellum Executive Director Will Evans, “painted a dire portrait of economic need. 28% of applicants were recently laid off from secondary, non-literary jobs, and a full 50% now earn an annual income of less than $15,000.”

“On the other hand,” Evans continued, “we learned so much about writers across the state — both about their inspiring and creative work and about their resilience. We already knew that Texas writers were some of the most diverse and curious writers on the planet, but the list of publications they sent us in their applications reveals a whole new level of incredible work.”

Along with seed funding from Deep Vellum board member Paul Wingo, the Writers’ League of Texas also donated proceeds from a One Page Salon event they held this month. Executive Director Becka Oliver explained their decision to raise money for the fund: “The Deep Vellum Emergency Fund’s goal to support Texas writers in need aligns perfectly with everything the WLT is about – it was an easy decision to throw our support behind it. This literary community of ours is big and diverse and creative and strong. It’s up to all of us to make sure the most vulnerable among us get through this global crisis and that they are able to continue sharing their stories long after this pandemic has passed. I’m so grateful to the Deep Vellum Emergency Fund for stepping up and to all of the folks who joined us for our One Page Salon fundraising event and added their dollars to this worthy and important effort.”

Contributions can still be made to the Deep Vellum Emergency Fund here. All contributions will now be put toward Round Two, which will open when funds become available. Contact Deep Vellum Development Coordinator Lindsay King at lindsay@deepvellum.org if you would like to discuss other giving options.