By WRLWAdmin on November 14, 2019Comments Off on Online convenience helps fulfill hoop dreams

Chao is the founder of Hoop Club (hoopclub.org), an online community of pick-up basketball players wanting exercise, convenience, a dedicated court and most importantly, playing time. 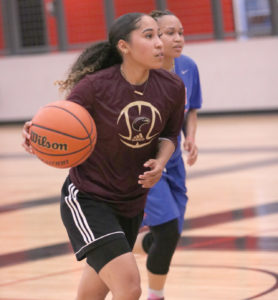 Born in Houston, Chao grew up in Lake Highlands playing basketball in his driveway like so many did in their youth. He went to St. Mark’s School of Texas and Rice University, based on the recommendation of his Sunday school teacher.

“People think you have to be real smart to get into Rice,” Chao said. “And you do. But I didn’t have the best grades. So I made a video with a high school friend on the Rice campus called ‘Rice Rice Baby!’ [A parody of Vanilla Ice’s ‘Ice Ice Baby’] and I am convinced it is the only reason I got into the school. As a freshman, people from the admissions office would recognize me and run up and say ‘You’re the one in the video!’”

Elle Woods would have been proud.

He studied biochemistry and cell biology. “I was trying to be a good Asian boy, following my parent’s dream of me becoming a doctor,” Chao said. He would later earn a masters degree in public health from Emory University in Atlanta. He worked in the field for a couple of years in an office next to the Center of Disease Control (CDC) and actually worked directly for the CDC during a flu epidemic.

On the side, Chao started a personal health record company with some coworkers called My Vaccine. “Our theory was that no one was really dominating the electronic health records space,” he said. “We tried to take one piece of medical information that you have to track from birth to death and try to build confidence with the consumer.” But ultimately, he decided to take experience from his first venture and follow in his father’s footsteps as an entrepreneur.

Leaving science behind, Chao let his innate business acumen take over. “About six years ago, I started the first Escape Room in Texas,” Chao said. “I got married [to Elizabeth] and moved to Houston as my wife was getting her MBA, ironically enough, at Rice University. We had met in Atlanta. At that time, a friend of mine sent me an article about how popular Escape Rooms were in Asia. I started a company [in Houston] and it became my fulltime job very quickly.

“That part of my story is important because I think what connects the Escape Room business with Hoop Club,” Chao, 35, said, “is that I just enjoy bringing different people together.”

Upon returning to Dallas, he kept the Escape Club business but sought out another venture. “I’ve always been a basketball fan, but my main sport was actually tennis,” Chao said. “I played in some pickup games in college and later at LA Fitness [off I-635 and Preston Road]. I didn’t play in high school, so I didn’t have the fundamentals that most players have out there.”

Following his wife’s career with a Big 4 accounting firm (Ernst & Young), he lived in New York City for two years. “Living in New York, I came across this company called Indoor Hoops. They had these pickup sessions around Manhattan and Queens and they were just playing out of elementary schools. There was no three-point line. Games were played from one to seven [points]. There was something missing from that experience.”

After returning to Dallas, he said he wanted to bring “Southern hospitality” to the game, but didn’t know if the concept would work because of the lower population density levels. “I got to learn about New York traveling to these gyms,” Chao said. “But down here, there are already a lot of big box gyms. I don’t know if I had an “Ah, Ha!” moment, but I knew that I wanted to give the concept a try down here.”

What is now Hoop Club evolved in October 2017. He contacted many area recreation centers, churches and private facilities, but they all wanted high hourly rental fees and liability insurance. “It didn’t seem like the business model was going to work,” Chao said. “No one gave me a chance. But finally one church in Richardson — Asian American Baptist Church where I had a friend — let me set it up there for a small fee. Now we had a chance to test the waters.”

The brilliance of the service is its simplicity. He began posting an opportunity to play pickup basketball on social media and set up a website. All reservations are made online. People login to hoopclub.org and click “sign up now,” which reveals the various times and locations of the sessions. Players are rated, for guideline purposes, to eliminate mismatches so people play at their peer level. The process takes about one minute.

For a $10 fee, 15 players participate for two hours. Teams of five players are drawn and never have to wait more than 15 minutes before returning to the court. A 10-minute clock is in place and games go to 21 points with a three-point line in play. There is a Hoop Club facilitator at each session, but no referees as players call their own fouls in true pickup game fashion.

What began at one facility, one night a week with six players engaged in a three-on-three game has become a bona fide company with more than 1,200 participants at eight facilities around the metroplex. “One of the milestones is when we became an official vendor to the City of Dallas,” Chao said. “Once we got to that level, we got credibility. Two facilities have actually reached out to us.”

Growth is inevitable, but right now greater Dallas is the focus. Chao continues to run his Escape Room company and hopes to merge the two businesses under one umbrella. “I think for both companies, I see a very similar expansion. I think Hoop Club can scale up faster because it is more digital.”

He created the software package for Hoop Club himself. “I don’t find it [the software development] all that impressive. It was easy,” Chao said. Apparently, it is as easy as getting into Rice University.