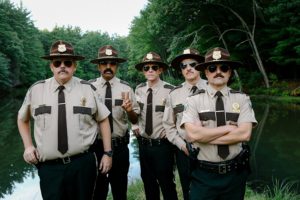 Do you remember “Caddyshack 2” or are you actively trying to forget that it exists? That’s what happens when comedy sequels go bad. A movie studio wants to cash in on the good ol’ days and tries to force a homogenized piece of garbage down the movie going public’s collective throat. Some movies like this fail and then others ruin the original … looking at you “Austin Powers: The Spy Who Shagged Me.”

That’s what makes “Super Troopers 2” a rare animal. The only group of people begging for a sequel to the 2001 cult comedy were its fans, who are no longer 20ish-year-old stoners that want something to watch while sucking down tacos at 2 a.m. The fan base, who provided a $23 million box office run and massive DVD success, is now in their 40s with mortgages and 401(k)s to worry about. Will they really run out to see this movie and more importantly, will it soil the good name of the original?

The answer to that depends on what’s happened to those people in the last 17 years. If you’ve grown to be hyper-sensitive to political incorrectness, “Super Troopers 2” will most definitely upset you. If you can’t handle any mockery of the stereotypical Ugly American, again, you’ll be headed for the exits.

Of course, the Broken Lizard guys (Jay Chandrasekhar, Paul Soter, Steve Lemme, Erik Stolhanske, Kevin Heffernan) don’t care. This sequel about a group of dysfunctional Vermont police officers delivers exactly what super fans should have expected: an immature, devoid of plot comedy with ups and downs. The only difference is that the lows are way, way lower than the failed bits in the 2001 original.

The movie begins with such a wheels off, insane sequence that it rivals the brilliance of the original’s opener. The story kind of falls apart after that. The gang has lost their Vermont State Police jobs due to an unexplained incident involving Fred Savage. An obscure border dispute means that Vermont’s governor (Lynda Carter) needs a State Police force to now work in a tiny Canadian town that will soon be absorbed by the United States.

The tiny town in Quebec is none too pleased about becoming Americans and a trio of Mounties (Tyler Labine, Will Sasso, Hayes MacArthur) do their best to chase off their new police force. They also have to deal with the town’s mayor, Guy Le Franc (Rob Lowe), who owns a brothel and constantly pokes fun at uptight American sexuality and the low alcohol content of the beer.

The bits that work are really great and many of them are much more subtle than in the original. Most of the better moments involve Heffernan’s Rod Farva, who becomes the embodiment of American ugliness. He nonstop shouts American jingoism, overeats by swallowing M&Ms whole, and has a bad comeback for everything. We all have at least a shred of stereotypical “America” in us, and the entire point entire point of Farva is for us to laugh at ourselves. Are there easy swipes at French Canadian accents? Sure. But come on. Of course these guys are going to hammer away at how they say “sorry.” Those are easy jokes and even the extremely stupid ones are funny. Now the running gag involving Thorny Ramathorn (Chandrasekhar) becoming more and more feminine? Funny at first, but pushing it throughout the entire movie is the very definition of diminishing returns.

“Super Troopers 2” is exactly what you would expect it to be. It’s silly and not interested in being anything other than that. It’s all done with such a goofy wink that it manages to be offensive without actually offending anyone. The biggest plus is that the nods to the original are few and far between, but it doesn’t quite reach the overall comedic appeal of it.

Silly ‘Super Troopers 2’ offensive without offending added by WRLWAdmin on April 21, 2018
View all posts by WRLWAdmin →