By whiterocklakeweeklyadmin on December 30, 2020Comments Off on Football team makes history with new title

The Warriors jumped out to a strong start with senior running back Ryan Henry scoring the first touchdown of the game. After a couple of receiving touchdowns between senior quarterback Nathan Lewis and junior receiver Mitchell Crow, the Warriors were up 20-0 at the end of the first quarter. The Rams of Allen Academy fought back in the second quarter, but the Warriors managed to hang on to a 26-21 lead going into halftime.

“We were here last year, and I knew these resilient kids would show up ready to play today,” said Head Coach Jairus Mitchell. “We as a community have been through so much this school year and I am so proud of these kids for capitalizing on this big moment.” 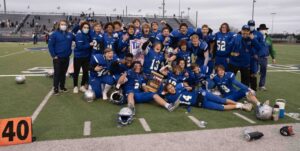 Lakehill has six seniors this season: Ryan Henry, Nathan Lewis, Matthew McCall, William Leake, Tristan Leach and Keegan Clendenin. “These seniors have played a huge role in this football program over the last few years,” said Athletic Director Bob Yttrehdahl. “The bond these guys share with all of their teammates is special. This season was not guaranteed, and we did not know what each week would bring. We are grateful for the opportunity to get to play and ending the season this way is a feeling I can’t describe for these kids and this community.”

Lakehill finishes the season 7-0 and recorded the first TAPPS Six-Man Football State Championship in the history of Lakehill.

Lakehill is located in the heart of the Lakewood neighborhood in East Dallas. The six-acre main campus houses classrooms students in kindergarten through grade 12, as well as a gymnasium, a cafeteria, two libraries, numerous science and computer labs and the Charles J. Wyly, Jr. Auditorium.