As the sun begins to set in East Dallas, the unexpected sound of African drumbeats echoes through the Lakewood neighborhood.

The music and the aroma of authentic Congolese cuisine guide you to a celebration commemorating the 10-year anniversary of Congo Restoration, a non-profit organization lovingly supported by many of these East Dallas residents.

Inside the party, a glorious African woman envelops guests with warm hugs. Gorethy Nabushosi is grateful for this community that has helped revitalize her home country.

“I just can’t express the joy that was in me,” Nabushosi says of that night just a few weeks ago. “It pushes me to go forward. You can see that we can accomplish more and more.”

The mission of Congo Restoration is to restore the Democratic Republic of Congo by empowering women and children who have been brutalized by war.

McMullan traveled to Rwanda several years ago and felt an instant connection to the African people.

“They are the most joyous, amazing people that I’ve ever met,” McMullan says. “I just felt like I belonged there in some ways.”

Shortly after returning from her trip, McMullan met Nabushosi who had also recently returned from a trip to Africa. The two women’s shared love for the African people inspired Congo Restoration.

“I don’t think either of us knew what we were doing, but I think the passion can take you somewhere,” McMullan says.

Nabushosi’s history with her home country is complicated. In 1997, the attorney and women’s rights activist fled Congo when it became unsafe for her husband and six children to stay there.

After making a modest life for themselves in McKinney, Texas, Nabushosi had a life changing conversation with her friend, the wife of recent Nobel Peace Prize winner Dr. Denis Mukwebe.

“She told me, ‘you guys forget about the people who live there [in Congo]. This is all happening.’ She started telling me stories. I felt my heart really melt. I did not sleep for many days. I felt like I needed to do something,” Nabushosi recalls. 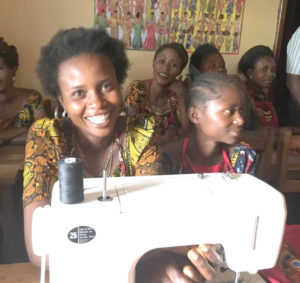 Against the wishes of her husband and children, Nabushosi returned to Eastern Congo to see devastation worse than what she could have ever imagined.

“It was a village where I met this little girl outside. She said, ‘my parents are dead, we buried them over there. I’m looking for something for my siblings to eat.’ The girl was 7 years old.”

Tears fill Nabushosi eyes as she tells the story.

“I felt really, really bad. I felt like I just want to become the mother in their house. I thought in three months, this kid is going to die.”

Nabushosi called her husband. She remembers telling him, “I know we haven’t paid the mortgage yet, but please send money. Send it now because this is going to save people’s lives.”

She rented a small house with the money and turned it into an orphanage for 30 children. The youngest was three and the oldest was 12.

Leaving the children in good hands, Nabushosi returned to the United States to look for money. She started contacting churches and eventually met McMullan through the United Methodist Committee on Relief.

McMullan turned to her friends and the congregation at Greenland Hills Methodist Church for financial support. She and Nabushosi worked together to come up with creative ways to pay for food, healthcare and schooling for the 30 children.

“We invested heavily in these 30 kids and I believe most of them will probably go to University. We hope they become leaders in their community,” McMullan says.

But that was just the beginning. Congo is a country that’s been desecrated by war. The fight for the precious mineral Coltan found in cell phones and computers ravaged villages leaving the Congolese people broken.

“There are thousands of people with nothing to do because there is no infrastructure. So, people don’t have a skill,” McMullan explains.

In 2011, she and Nabushosi started a sewing school for women. Hundreds stood in line to be interviewed.

“The trajectory of their lives is completely going to change and now they know that,” Nabushosi explains. “They learn how to sew. The vision of life changes and they can make money and money is power.”

Since its inception, more than 400 women have graduated from the program. McMullan attended a graduation ceremony last year.

“When you walk in the village, you can pick out our students immediately. The difference in their confidence is obvious.” McMullan says. “Not only do the lives of the 409 women change, the lives of everyone around them changes. Statistically, if you help a woman rise, everybody rises.”

“I have no thought that East Dallas needs to swoop into Eastern Congo and fix everything. We can’t do that,” McMullan says. “However, what we can do is give them a leg up so that they can fix it themselves. And, that is simply what they need.”

McMullan and Nabushosi currently have plans to build an American-like school for Congolese children. They hope to start with first grade in 2019 and will add on each year. Nabushosi is returning to Congo in a few days to check on the progress of the new school building.

“I am really happy. I don’t cry as much because when I think about what we have become — I feel real joy in me,” she says.

You can learn more about Congo Restoration at the Global Village Market on Nov. 3 and 4 at Greenland Hills Methodist Church, 5835 Penrose Ave, Dallas. The event will feature 30 non-profit organizations.

Local women help ‘the vision of life’ change added by WRLWAdmin on November 2, 2018
View all posts by WRLWAdmin →