By WRLWAdmin on January 2, 2020Comments Off on Parkland launches daycare for patients

What happens when a parent gets sick — and doesn’t have childcare lined up during treatment? When researchers study women’s health, they often overlook that critical need. But Dallas’s Parkland Hospital is trying to change that.

Just a few weeks before Lakesha Bunch’s 10-month old son, Josiah, was born, Bunch found out that she had breast cancer. As a stay-at-home mom with two other kids — Blake, 5, and Baylor, 3, — Bunch’s first thought was, “Who is going to take care of the children?”

Her husband started taking Fridays off from work whenever he could so she could get chemotherapy. Family members helped out, too. Still, sometimes she missed appointments, or had to bring her children along.

“I remember sitting in chemo, and I remember crying because I was just worried about my kids,” Bunch said. “And I remember the nurse saying, ‘You have to focus on you,’ and that’s hard, you know, as a mom, and I already felt so guilty about them having to go through all of this.”

When Bunch scheduled her surgery, a social worker told her about a program called Mommies in Need. The the nonprofit provides free full-time nannies for parents who are going through a health crisis.

Natalie Boyle founded the organization five years ago. Boyle had a series of health problems, including thyroid cancer, following the birth of her twins — so she understands how hard it is for mothers to focus on their own health when there are young children at home.

“How can you address women’s health if you’re not taking care of childcare?” Boyle said. “Nobody had realized that, and I think the only reason [I did] is because I lived it.”

Boyle wanted to support more parents dealing with health issues, so she approached Parkland’s Center for Health Innovation and Clinical Outcomes to create a free day care on the hospital campus. Parkland was on board, and now the day care is slated to open next fall. 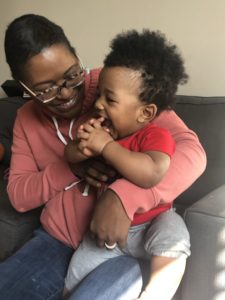 “It’s going to the frontline,” said Dr. Kavita Bhavan, director for Parkland’s Center for Innovation. “And thinking about how can we design around people, and how can we reimagine how care is delivered.”

When experts study barriers to care, they often ask patients about transportation, nutrition, insurance — but no one had considered asking patients about childcare. So Parkland’s Dr. Kimberly Kho decided to ask that question and interviewed more than 300 mothers at Parkland who had children under the age of 13.

“What we found is that when women are asked this question — this is the number one reason that they are missing their appointments,” Kho said.

The study revealed women typically miss four appointments a year, Kho said, and 9 out of 10 women said they missed well visits. This may explain why she sees so many women in the emergency room — especially in the evenings.

“They are coming in at 7 or 8 o’clock — why is that? It’s because their partner has come home from work, they fed the kids dinner, bathed them, gotten them in their PJs,” Kho said. “Emergency room services are not the ideal place to get health care.”

Lakesha Bunch gets that, but she says sometimes parents just don’t have a choice when there’s no other reliable childcare. A day care facility at the hospital would have meant a lot to her family.

“But if I could like take them with me, and they knew that I was still in the same place … I’m just going to be over here … I would have felt a lot less stressed,” Bunch said.

Doctors involved in this collaboration have high hopes that one day it will stretch beyond the walls of Parkland Hospital — eliminating the need for parents to choose between childcare and their health.